The Los Angeles Times (Technoloplis) has a very nice article about LibriVox in their Sunday, January 15 edition. Here is the link … I think LA Times might require registration, so here are some of the juicy bits:

Kara Shallenberg records audio books — most recently the Frances Hodgson Burnett classic “A Little Princess” — that can be downloaded from the Internet.

A stay-at-home mom in Oceanside, she is not a professional reader, let alone one of the highly regarded actors such as Jim Dale, Ruby Dee and Michael York who have infused audio books with compelling, nuanced performances.

But Shallenberg’s recordings are free, unlike the professionally done audio books, which can cost $20 to $50 to download.

Shallenberg is one of a rapidly growing number of volunteers who are making recordings of public-domain books that can be copied from the Internet at no cost.

Free books read by amateurs are among the latest uses of podcasting, whereby recordings are easily made on computers and sent out over the Internet for downloading to other computers and portable players.

How good are the readings? Varied, to say the least. Some are quite good, even excellent. Alex Foster of Nottingham in Britain has such a sonorous voice and gives such vibrant, classy readings that it sounds as if he came right out of a BBC studio.

On the other end of the scale are readings that sound as if they come from your worst nightmare of community theater — either monotone or way over the top.

Still, McGuire said all were welcome. “Early on, we decided we were not going to make any value judgments about a person’s reading,” he said. “We get them through the technical problems and that’s it.”

All the recordings I heard on the site could be understood, at least. And many of them, if amateurish, got by on the strength of the texts. You can get caught up in a story, even if the reader is not a member of SAG.

After all, if your were lucky enough to be read to as a kid, it probably was not by a pro. But did it keep you from asking for just one more chapter of “Treasure Island” before falling asleep? 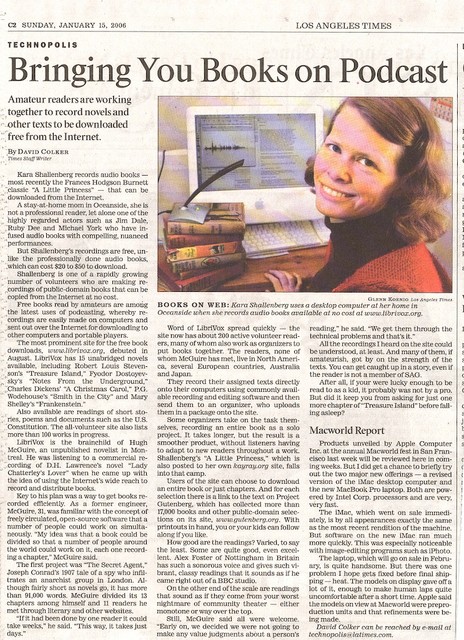